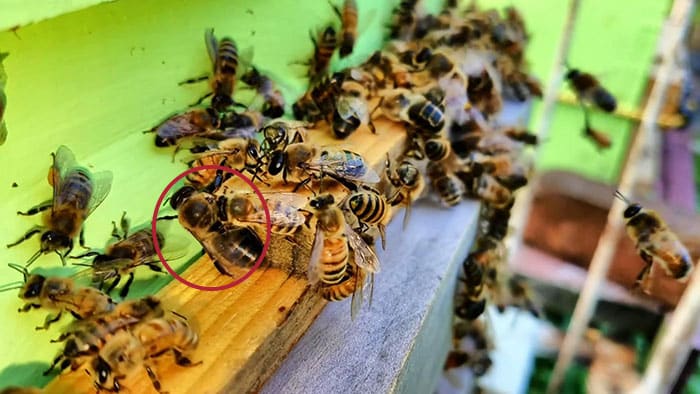 A drone bee is a male developed from a queen’s unfertilized egg. Larger than workers, a drone’s sole purpose is to mate with a virgin queen. Drones perform no other hive tasks and cannot sting. Since they have a limited function, the colony controls the drone population, so they do not burden resources.

Queens mate once in their lifetime with as many as 20 drones. However, few drones successfully mate during their lifetime. Drones that mate die afterward from a ruptured abdomen.

This article discusses how drones develop, their role in the hive, and other facts to assist beginning beekeepers.

What Gender Are Drone Bees?

The main difference between drones and other bees is their sex.

Drones are male honey bees. The other two adult honey bees, queens and workers, are female.

How Drones Are Made

Wax cells can serve different purposes depending on their size and location in the hive. Guided by queen pheromones, workers monitor the colony’s needs and determine what size cells to build.

See What Is Honeycomb? (Talking Beeswax) for information on how bees make wax comb.

Drone cells are larger than other cells to accommodate their occupants’ larger bodies. The colony monitors the number of drones in the hive and determines how many drone cells to build.

A queen fertilizes most of her eggs with semen. These fertilized eggs develop into females. Most females will become worker bees, while a handful may develop as potential queens.

Like other bees, the drone’s unfertilized egg passes through several subsequent stages – larval and pupal. Then, finally, an adult drone emerges from the cell after about 24 days.

Capped drone brood is pretty easy to spot. The cells tend to be grouped together, often near the bottom of a frame.

Due to the drone’s size, the cells rise above the face of the comb, unlike flatter worker cells.

Since the egg is not fertilized, drones have only one set of chromosomes, or “haploid.” Workers are “diploid,” having two sets of chromosomes.

Being haploid may make drones more susceptible than workers to environmental stresses “because they have only one set of chromosomes … giving them no opportunity to compensate for inferior genes with alternate gene versions.”[1]

Can A Drone Become A King Bee?

There is no king bee. The queen is alone in having a royal title among the honey bees.

The queen bee is responsible for egg-laying and producing chemical pheromones that maintain cohesion in the colony. Worker honey bees perform all other hive maintenance and food production tasks.

See our article What Is A Worker Bee? for information about these industrious females and the many jobs they perform.

Drones do not sting because they have no stinger. Thus, drones would be ineffective guard bees.

In addition, drones rely on workers to feed them.

While they play no role inside the hive, drones play a significant part in the propagation of the species.

A drone bee function is to mate with a virgin queen, providing sperm to fertilize eggs.

What Is A Drone Congregation Area?

A drone congregation area (“DCA”) is a midair location where drones gather in mating season. Drones wait for virgin queens to enter the space. Drones from a hive will disperse to several DCAs not far from home.

DCAs are about 15 to 125 feet (5 to 38 meters) above ground. On her nuptial flight for mating, a virgin queen enters the drone congregation area, and she draws drones with a sexual attraction pheromone.

Queens travel further from home to DCAs, reducing the possibility of inbreeding with drones from her own hive and increasing genetic diversity.

Mating With A Virgin Queen

As they get closer, drones make visual contact with the queen.

A drone’s endophallus, normally inverted inside the body, becomes everted. A drone mates by mounting the queen and inserting his endophallus.

After ejaculating his sperm, the drone falls back. The endophallus is torn from his body, rupturing his abdomen and killing him.

While the queen mates with up to 20 drones on her only mating flight, few drones mate with a queen during their lifetime.

Learn more! See our article about the role of the queen bee in the hive.

Drones are larger than workers in length and width, though not quite as long as the queen.

A distinguishing feature of a drone is its large eyes. They are nearly twice as large as a worker’s eyes and meet near the top of his head. (The large eyes facility the spotting of queens in the DCA,)

A drone has large wings that cover the abdomen. With large wings, a drone can fly for an extended period in a drone congregation area.

A drone’s lifespan (one that doesn’t die from mating) is about 60 days.

Drones born late in the season may have a shorter life span because they are evicted from the hive before winter.

Why Are Drones Kicked Out Of The Hive?

Drones are kicked out of the bee hive because they serve no function in cold weather and are a drain on the hive’s food resources. So, the workers forcibly evict drones from the hive in autumn. The video below shows drones kicked out of the hive by thousands of worker bees.

Out in the cold with no food, evicted drones die off quickly.

The Varroa destructor mite is a parasite that attaches itself to honey bee brood and adults. Varroa infestation leads to diseases and viruses responsible for significant colony losses.

Beekeepers may use special drone frames. These frames, embossed with larger cell patterns, encourage the development of drone cells that a beekeeper can easily remove.

Drone honey bees add little value to the maintenance of their hive and the survival of their colony.

However, drones play a critical role in the survival and propagation of the species. In the end, the successfully mated drones sacrifice their lives for this purpose. So please don’t be too dismissive of them.

This article is part of our beginner’s guide to honey bees. 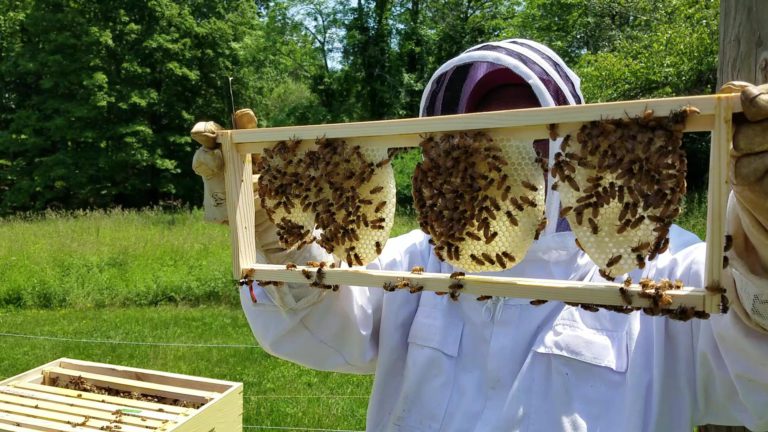 Honeycomb is the six-sided wax cells built by bees to store pollen, nectar and honey. It’s also used to raise brood. Learn about its construction and uses. 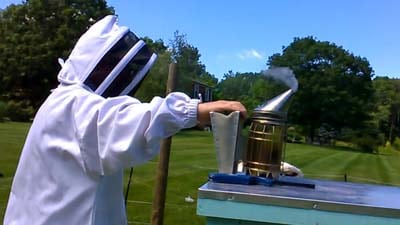 To inspect a beehive, open it and carefully remove frames for visual examination. Inspections are best done midday in favorable weather conditions. Try to minimize the disruption to the bees’ activity. Among other things, inspections help assess the colony’s health and identify issues requiring remediation. As a beekeeper you will get stung. Prepare yourself with protective gear and know what to do when you are stung.