Bees use honeycomb cells to store pollen, nectar, and honey. Also, the queen lays eggs in honeycomb cells. The eggs pass through various development stages to become adult bees. (See our article Honey Bee Life Cycle (Why You Need To Know It) for more information.)

Honeycomb is also used to provide information within the colony as it transmits the scent of the queen’s pheromones.

A few words on terminology:

The whole of the bees’ wax structure may be called “honeycomb.” It is also referred to as “comb” or, when empty of stores or brood, “drawn comb.”

Sometimes, honeycomb refers only to the part of the comb that contains honey. When extracted from the hive intact, you may also see it called “comb honey.” “Brood comb” are cells that contain, you guessed it, brood.

In this article, we’ll discuss:

How Do Honey Bees Make Wax?

In 1792, John Hunter, a Scottish surgeon, determined through observation and experimentation that “wax was not transmuted pollen but was secreted only by worker bees.” (Honeybees and Wax: An Experimental Natural History by H. Randall Hepburn)

We now know that between the ages of 12 and 18 days, worker bees develop wax glands. These glands secrete a liquid that solidifies as wax flakes upon contact with the air. These flakes, or wax scales, are passed to the bee’s mouth and mixed with other secretions making a pliable wax.

Cells with developing brood or completed honey are closed with wax cappings. Hence, the terms capped brood or capped honey.

In an empty space (such as a foundationless frame), wax producing bees “festoon” in a chain, creating the hexagonal cells from the top down. Such honeycomb will be two-sided with a rib down the middle have cells on each side.

Without foundation, the comb is often attached to the sides and the bottom of the frame for stability.

On foundation, the bees draw out wax comb using the embossed foundation as a guide.

See our article Frames With Foundation (Or Foundationless?)

Generally, the walls of the comb will be parallel. Bees leave about 3/8th of an inch (bee space) between each layer section.

Despite the efforts to keep the girls on parallel tracks, bees may still go in other directions. They may build comb in unusual places requiring a some maintenance work by the beekeeper.

Comb cells may appear flat. But, upon closer inspection, you’ll see they tilt upward at a slight angle to prevent pollen, nectar, and honey from spilling out.

Why Are Honeycomb Cells Hexagonal?

A hexagon is a plane figure with six sides, as shown in the accompanying illustration. But why has nature selected the hexagon as the optimal shape for honeycomb?

A hexagon is a plane figure with six sides, as shown in the accompanying illustration. But why has nature selected the hexagon as the optimal shape for honeycomb?

Bees spend an enormous amount of energy building honeycomb. Bees consume about 5 lbs. (2.27 kg) to make 1 lb. (.45 kg) of wax. They need to secrete wax scales, chew them, and heat them to form the comb.

Since building the comb is an expensive undertaking, it is precious to the bees. As a bee, you’d want a cell shape that provides the greatest storage area using the least amount of wax. 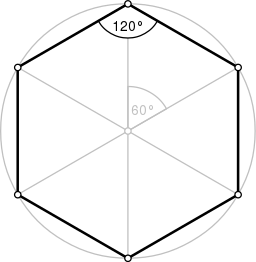 The hexagon provides the more area relative to its perimeter than circles, squares or triangles. The following video explains the superiority of the hexagonal shape in detail. Why do bees build hexagonal honeycombs? – Forces of Nature with Brian Cox: Episode 1 – BBC One:

Not only are hexagons the most efficient shape for honeycomb, but they provide strength to the comb. Why Nature Loves Hexagons from It’s Okay To Be Smart:

It is generally accepted that the bees build circular or cylindrical cells. These circles then morph into hexagonYetgh physics. Yet, there is some evidence that bee behavior plays a role in the ultimate shaping of the cells. (Source: Nazzi, F. The hexagonal shape of the honeycomb cells depends on the construction behavior of bees. Sci Rep 6, 28341 (2016) doi:10.1038/srep28341)

Honey cells are capped in such a manner that their hexagonal shape may not be obvious. The hexagon is recognizable in capped brood or empty cells.

A notable exception to the hexagon shape in the honeycomb is the cells designed to raise a queen. The larger size of the queen relative to other bees requires a different shaped cell.

Queen cells can be supersedure or swarm cells.

Supersedure cells are usually long, peanut-shaped cells hanging on the face of the comb. Bees build them in expectation of replacing the current queen.

Swarm cells tend to form near the bottom of the frame in the form of queen cups. The intent is not to replace the queen. The goal is but to make sure there are two queens. One queen leaves with the swarm to form a new colony. The second queen remains behind to continue the existing colony.

Drones (male bees) are larger than worker bees, though not as large as the queen. Cells for raising drones are thus larger than those for workers.

Based on the status of the hive, the colony determines how many drone cells to build. The queen distinguishes the different sizes of the cells. She deposits unfertilized eggs in the drone cells. Fertilized eggs go in the worker cells.

When first made, beeswax is a translucent white color. It yellows over time.

Brood cells are constantly in use as the colony feeds the brood, and  reused later for new eggs. The gradual buildup of propolis, debris, and recycleually turns the wax a dark brown despite the bees’ cleaning efforts. The cappings on these cells tend to mirror the color of the cells themselves.

When bees determine that they’ve converted nectar to honey, they cap the cell to seal it. These cells and their cappings don’t experience the same use as brood cells. They tend to be much whiter than capped brood.

In an overwintered hive, queens have plenty of existing honeycomb for laying eggs at the first signs of spring.

Beginning beekeepers just starting out don’t have that advantage. Thus, some of our recommendations for beginners.

Get Your First Bees In A Nuc

A nuc (or nucleus colony) is a mini-hive. It usually consisting of 5 frames with a queen, bees, frames with drawn comb. The comb contains brood in various stages of development and some food stores.

If you start with a bee package, you get bees, including a queen, but no comb. Without comb, the queen cannot begin laying eggs immediately. This delays the growth of the population.

A nuc costs more than a package. We recommend you start with one if it fits within your budget.

We’ve started building some foundationless colonies. However, foundation is easier for beginners. It gives bees someplace to start drawing comb immediately. This is especially valuable if you start with a bee package.

When you install your first colonies in early spring, nectar should be flowing. However, while the bees orient themselves to their new location and adapt to a new queen, feed them 1:1 sugar syrup.

See our article What, When & How To Feed Honey Bees for information on making sugar syrup and options for feeding your bees.

Sugar syrup and nectar will stimulate comb building. The more comb they build, the more eggs the queen can lay, and the faster the population will ramp up.

We only feed when it’s necessary. Once you notice that the bees slow their consumption of sugar syrup, it’s time to stop feeding.

Let them forage for nectar.

Honeycomb wax has a variety of uses outside the hive but can also be reused in the colony.

After uncapping, turning at frames at high speed with a centifugal extractor releases the honey from the comb. The honeycomb stays intact.

You can save these these frames for hives the following year. Not needing to draw new comb saves the bees time and energy and can result in higher or faster honey production.

Empty brood comb in boxes can attract a swarm. Catching swarms is a great way to get free bees to grow your apiary.

Comb with honey can be extracted in its original form, wax and all. It is the ultimate form of raw honey.

See our article What Is Raw Honey? (Besides Delicious) for more information.

Simply cut the comb honey out of the frame and store it for future use.

Honeycomb, including the wax, is edible. Be careful, though. Overeating wax as it can cause stomach obstructions as described on healthline.com.

I like to spread in on something hot like a toasted English muffin, which softens the wax. I also chew it like gum and spit out the wax once I’ve extracted all the honey. Yum!

If you extract honey using a crush and strain method, you’ll end up with a lot of beeswax after bottling your honey. You can also harvest the beeswax from other frames.

Beeswax is melted and used in a variety of products including:

The list can be quite extensive. A recent study even concluded that when a dressing that included beeswax was applied to second degree burns, patients experienced reduced pain and shorter hospital visits.

Honeycomb is a critical component of a honey bee nest that you cannot buy. It’s up to you, as a beekeeper, to provide an environment where the bees can build out their comb and make your hive a home. There are creative (and potentially profitable) ways for you to make use of your colonies’ beeswax.

Honeycomb in Bee Culture, The Magazine of American Beekeeping

I’m Melanie Howard. My husband, Jim, and I want to share with you everything we’ve learned about beekeeping since we were newbies 6 years ago. Maybe the the ups and downs we’ve experienced can help you along the way.

BeekeepingForNewbies.com is owned by Firefly Fields, LLC ("Firefly"), a Wyoming limited liability company. Firefly is a participant in the Amazon Services LLC Associates Program, an affiliate advertising program designed to provide a means for sites to earn advertising fees by advertising and linking to Amazon.com. This site also participates in other affiliate programs and is compensated for referring traffic and business to these companies.

A honey bee garden that provides pollen and nectar rich plants throughout the year may give your colonies the boost they need. Here are plants to consider.

Educating yourself is one of the important steps in beginning beekeeping. These are books we own and use. All of them are written by noted experts in the field.

Comb honey is the purest form of raw honey. We’ll explain how easy it is to enjoy this delicious honey, wax and all.

We use cookies to ensure that we give you the best experience on our website. If you continue to use this site we will assume that you are happy with it.OkCookies Policy