A worker bee is an infertile female unable to reproduce. A queen bee’s pheromones suppress the workers’ reproductive organs. In their 45-day lifespan, workers perform most of the tasks needed in a hive. Workers forage for resources, make honey, nurse brood, and guard the hive, among other responsibilities.

The queen bee handles the significant tasks of laying eggs and producing chemical substances called pheromones that communicate desired behaviors to the colony. A drone’s job is to mate with a virgin queen.

Worker bees shoulder all the other chores required for the colony to grow and survive. Throughout her short life, a worker bee will change roles several times.

This article is part of our series What Are Honey Bees? It covers what makes a worker different from other bees and the various jobs workers perform.

How Are Worker Bees Different Than Other Honey Bees?

All honey bees begin as eggs deposited in a wax comb cell by a mated, fertile queen bee.

The queen fertilizes some of the eggs with semen. Fertilized eggs will be female, destined to be either a worker or a potential queen. Unfertilized eggs develop into male drone bees.

Besides noticeable physical differences, worker bees have unique traits that differentiate them from queens and drones. These traits allow the workers to perform specific tasks.

Workers have glands either unique to them or highly specialized for specific functions.

For example, only workers have a Nasonov gland which produces a chemical scent. “Bees use the scent to help sisters locate home, food, and water sources. It acts with queen substance in a pheromone concert to keep the bees of the swarm together.”[1]

Other glands process food for brood (including royal jelly) or secrete wax for building comb.[2]

Workers have pollen baskets for bringing pollen back to the hive.

The honey stomach, used to convert nectar into honey, is more developed in the workers than queens or drones.

Learn how bees make honey for more information about the honey stomach.

After about three days, the egg hatches a larva, the second stage of honey bee development. For the first three days, all larvae feed on royal jelly. Royal jelly is a creamy white, high-protein liquid secreted by worker bees.

Any larvae chosen to become potential queens continue to get royal jelly for the entire larval stage. Late in this stage, they also receive honey and particular hormones.

The diet of all other larvae changes from royal jelly to a beebread. Beebread is a mixture of pollen, nectar, and honey.

Thus, whether a female becomes a worker bee or a potential queen is determined by her early diet.

See our article here for details on the role of a queen bee and how bees make queens.

Honey bee colonies are notable for the division of labor among their members. Hives usually have only one reproductive female laying eggs – the queen. Having mated with male drones, the queen can fertilize eggs as she chooses.

To help maintain a proper division of labor, “queens produce pheromones that signal their reproductive status” and “inhibit[s] others from developing their ovaries.”[3]

However, if a queen is lost, a worker bee may become a “laying worker.”

What Is A Laying Worker?

If a hive loses a queen, and thus her pheromones, worker bees’ “normally suppressed reproductive organs become larger and active.”[4] After about three weeks, however, a worker cannot become a queen.

Such workers attempt to replace the queen and save the colony by laying eggs (hence, “laying workers”). However, since a worker has never mated, any eggs she produces are unfertilized and can only develop into drones.

In addition, a worker’s egg laying is haphazard. Her body is not designed to lay eggs properly, and she may deposit multiple eggs in a cell.

Unfortunately, a laying worker’s efforts cannot replace the lost queen. Therefore, if your hive has laying workers, then your hive is not queenright, and you need to intervene.

See our article Is Your Hive Queenless? Or Queenright? (How To Check) for more information.

Other Differences Between Queens and Workers

Queens and workers both have stingers. However, unlike a worker bee’s stinger, the queen’s stinger is smooth, straight, and has no barb. Therefore, a queen can sting multiple times without a barb getting caught in her victim.

A queen seldom stings a person—her stinger primarily fights off contenders for her throne.

When you get stung (and as a beekeeper, you will get stung), it will be a worker that gets you.

Once she returns from mating, the queen stays home unless she swarms. She does not even leave to relieve herself as her retinue of attendants removes her waste.

Workers leave the hive to forage, orient themselves to the hive (or re-orient if necessary), relieve themselves, or defend the colony.

Learn more! Check out our article about the role of the queen bee in the hive.

To begin with, workers are female, and drones are male. In addition, workers are more diminutive than drones.

Workers are built to defend the hive with curved, barbed stingers that inject bee venom in their targets. Drones do not have a stinger. The concentration of worker bees in a colony classifies honey bees as stinging bees.

A drone’s only job is to leave the hive looking for a virgin queen to mate. Few drones accomplish this task, and those that do, die as a result.

Drones have no assigned tasks to help manage the hive. On the other hand, workers can have many jobs throughout their short lives (as described further below).

Learn more! Read about drone bees and their role in a honey bee colony.

All honey bees have a head, thorax, and abdomen. However, worker bees are the smallest members of a colony. They are shorter than both the queen and drones. Worker bodies are wider than the slender queen but narrower than a drone.

Workers’ eyes are about half the size of a drone’s eyes. Like drones, but unlike queens, workers have a lot of hair on their bodies.

Unlike a queen, whose abdomen is a uniform color, worker abdomens are striped.

What Is The Role Of Worker Bees?

The role of a worker bee changes as she ages, and various glands and hormones develop and diminish. Also, her job may become more complicated, which requires some training.

Worker bees perform many tasks, but not all workers perform all tasks. The responsibilities assumed by any worker depend on the colony’s needs and the worker’s capabilities at that time. (I find this stuff AMAZING!)

For most of the first three weeks after emerging, a worker is a “house bee” performing tasks within the hive. However, after that time, “the glands that produce the larval food and wax begin to atrophy.”[5] Thus, house bees head out as foragers and become “field bees.”

Primary sources for the above table: The Tasks of a Worker Honey Bee by Jamie Ellis, Gahan Endowed, Associate Professor of Entomology, Honey Bee Research and Extension Lab – Dept of Entomology and Nematology – University of Florida, October 22, 2015, in American Bee Journal. Other sources are included below. 5 [6] [7]

How Long Do Worker Bees Live?

Worker bees that forage heavily during peak season have a short life span averaging 15 to 38 days. These are averages, and some workers may live up to 60 days.

Without the stress of foraging, worker life spans average from 150 – 200 days and possibly up to 320 days. This extended, less stressful period permits colonies to survive through winter and enter spring vigorously.[8]

With an understanding of workers and their tasks, you can spot various behaviors and even assess the age of the bees engaged in those activities.

[4] Laying Workers. It Happens. Fix It by Paul Hizsnyai in Bee Culture magazine. Essential beekeeping starter kits should include a deep hive box with a bottom board, covers, frames, foundation, essential tools, and some protective gear. As your colonies grow, you will need additional hive components and supplies available in a more expensive beginning beekeeping kit. 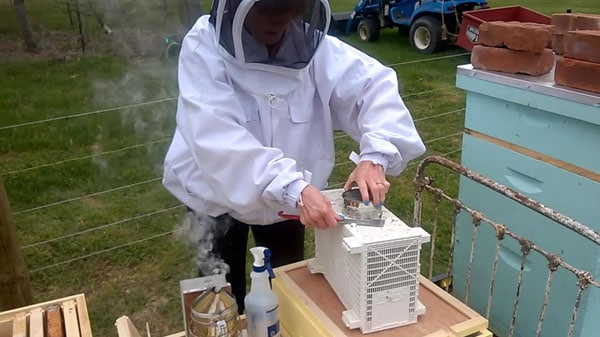 Follow our steps on how to start beekeeping and avoid many of the issues that discourage beginning beekeepers. Creamed honey is honey crystallized by a process that assures a lot of tiny sugar crystals. Small crystals give creamed honey a smoother, creamier consistency than naturally occurring large crystals. This spreadable form of crystallized honey may or may not be raw honey, depending on its processing. It’s spring and your new bees are ordered. Now you need to know how to install bees in a new hive. Here’s what to do with a nuc or bee package. Begin to add honey supers when a beehive’s upper box is about 75% full of drawn comb with brood or food. If it is early in the season, bees can use the new box for brood. If honeyflow has begun (or is imminent), using a queen excluder keeps brood out of the added honey super, reserving it for ripening nectar.