Honey bees face numerous threats from pests and predators that can damage their colonies and reduce their ability to thrive.

Honey bee pests and predators pose a problem for beekeepers. Common pests include parasitic bee mites, small hive beetles, wax moths, mice, and ants. Predators include birds, bears, wasps, and skunks. Beekeepers need to learn how to identify and protect against these threats to ensure the health of their bee colonies.

In this article, we’ll take a closer look at some of the most common noney bees pests and predators and discuss strategies for preventing and controlling infestations.

What Are Pests Of Honey Bees?

By feeding on their host bees, these mites can weaken bees and shorten their lifespan. It can also lead to the spread of viruses and other diseases within the hive.

The two most common types of mites a beekeeper will face are the Varroa destructor mite and the tracheal mite.

The aptly named Varroa destructor mite, which appeared in the United States in 1987, is a parasite that attaches itself to the honey bee brood and adult bees.

Varroa mites feed on the host leading to varroosis, a parasitic disease. Varroosis weakens the bee’s immune system making it more susceptible to other diseases and viruses. Varroa aid the spread of disease as they move around the colony.

Varroa mites are considered a leading cause of overwintering colony losses.

Beekeepers should monitor Varroa infestation all season by testing their colonies.

There are several methods for controlling infestations. The most effective of these are various chemical treatments, both organic and non-organic.

The appropriate chemical treatment depends on a variety of factors including the ambient temperature, the state of the colony’s population, and the presence of honey supers.

See the Varroa Mites: A Complete Treatment Guide detailed information on Varroa mites and how to manage them effectively.

Tracheal mites (Acarapis woodi) are another type of mite that can affect honey bees.

These mites live and reproduce inside the tracheal tubes of adult bees, where they can cause inflammation and blockages that make it difficult for the bees to breathe. This can lead to a weakened and shortened lifespan for the affected bees.

Tracheal mites are usually less damaging to hives than Varroa mites, but they can still have a significant impact on the health of a hive if left unchecked.

Due to their small size and the fact that they are inside the bees, the existence of these mites can only be diagnosed by microscopic examination of some bees.

If your colony is experiencing difficulties that cannot be explained by other issues, consider having them examined for tracheal mites. [1]

Check out Tracheal Mite by BeeAware.org for more information on these pests.

The small hive beetle is a small, brownish-black beetle that measures about ¼ inch (6 – 7 mm) in length. It has a slightly oval-shaped body and a pair of wings, which allow it to fly short distances. The small hive beetle feeds on nectar, pollen, and honey, but it can also feed on the larvae and pupae of bees.

The small hive beetle poses a significant threat to bees and their colonies, particularly during the larval stage.

It can contaminate the honey with its feces, which can make it unfit for human consumption. It can also damage the honeycombs, which can disrupt the structure of the hive and make it difficult for the bees to defend themselves against other pests and predators.

SHB can be spotted scurrying across top bars looking for cover when you inspect a hive.

The best defense against SHB is a strong, healthy colony. Weak colonies are most susceptible to major SHB infestations.

In-hive bait traps can help manage SHB in a hive.

Wax moths are another pest that can damage honey bee colonies.

These moths lay their eggs in the hive, and their larvae feed on the wax comb, honey, and pollen stored in the hive. This can weaken the hive and make it more susceptible to other threats.

To identify wax moths, look for their small, gray-brown moths in or around the hive, or for the webbing and tunneling that their larvae create in the wax comb.

As with the small hive beetle, a strong, healthy colony is the best defense against wax moths.

In addition, it is important to store empty comb properly. Freezing can kill any eggs that may be present.

Mice looking for a warm place to nest may set up a home in an unprotected hive.

Mice can cause significant damage as they eat honey and pollen needed by the bees, destroy comb, and gnaw on frames. Their urine and feces can ruin the hive for the bees causing them to abscond.

The best defense against mice is reducing the entrance and protecting with a mouse guard-a metal device with openings large enough for bees and ventilation but too small for mice.

Ants are generally more of a nuisance to the beekeeper than the bees, especially if present in large numbers.

Elevating the hive off the ground with a tightly fitted cover can minimize the intrusion by ants. In extreme cases, you can create a barrier by greasing the legs of a hive stand.

What Are The Predators Of Honey Bees?

Birds, bears, wasps, and skunks are among the most common predators of honey bees.

Birds, such as crows and bluejays, can attack and kill bees, especially when they are weakened by other threats. However, birds can pick off singular bees at times but do not pose a major threat to your colonies.

Bears are attracted to beehives as a food source. In addition to honey, bears will eat bees, brood, and larvae which are excellent sources of protein. Honey bees attempt to defend their hives from bear attacks. However, bee stings are a weak deterrent against the bear’s thick skin and fur.

Bears are big and strong – and they can climb and dig. Once an undeterred bear gets access to a beehive, it may destroy not only the colony but the hive itself.

The defense against bears is a properly installed electric fence. Once shocked, an electric fence becomes a significant psychological barrier to the bear.

If you keep bees in an area with bears, we strongly suggest you install an electric fence. Depending on the size of the bee yard and the choices you make, it may seem expensive. However, the cost of the fence may be very cheap relative to your potential losses due to bear intrusion.

See our article Protect Beehives From Bears (How To Set Up An Electric Fence) for detailed information.

Wasps, especially yellow jackets, will often prey on honey bees and can kill them in large numbers. This can be a problem for beekeepers, as a wasp attack can decimate a hive and cause significant losses.

There are a few ways to protect bees from wasps, such as using physical barriers like screens or wasp traps.

However, the most effective method of controlling wasps and yellow jackets is to destroy any nests you find near the apiary. Exercise caution and closely follow the instructions for any chemicals you use to accomplish this.

Skunks (and other nocturnal animals) may visit your hives at night attracted to sweet smells, and the scent of honey.

They are omnivorous and will eat a wide variety of food sources, including insects. Honey bees may be a source of protein for skunks, especially in areas where other food sources are scarce.

Skunks may disturb the hive and then eat bees that come out to defend the colony. A colony that is disturbed regularly at night may be agitated and aggressive to the beekeeper during the day.

Larger animals (like raccoons) are capable of knocking over a hive causing significant damage and the loss of bees.

The best method of controlling these predators is to make the hive entrance less accessible. Elevating the hive or otherwise blocking access can help.

Also, we’ve found that tightly securing a hive with ratchet straps can limit the damage should an animal overturn it.

Other Honey Bee Pests And Predators

This overview is by no means a comprehensive list of honey pests and predators. It simply covers the most common ones you are like to come across.

In addition to these, there are:

For a longer list that includes methods of control see Pests Of Honey Bees from Mid-Atlantic Apicultural Research & Extension Consortium at the University of Delaware.

Pay attention to industry publications for news on new threats.

There are many strategies that beekeepers can use to prevent and control infestations by pests and predators. Some of the most effective strategies include:

It’s also important for beekeepers to be aware of the potential impacts of pesticides on honey bees and to follow all manufacturers’ instructions.

Overall, the key to effective pest and predator control in beekeeping is to be proactive and take a multi-faceted approach that combines a variety of different strategies. By implementing a range of control measures, beekeepers can help protect their hives and ensure the health and success of their bees. 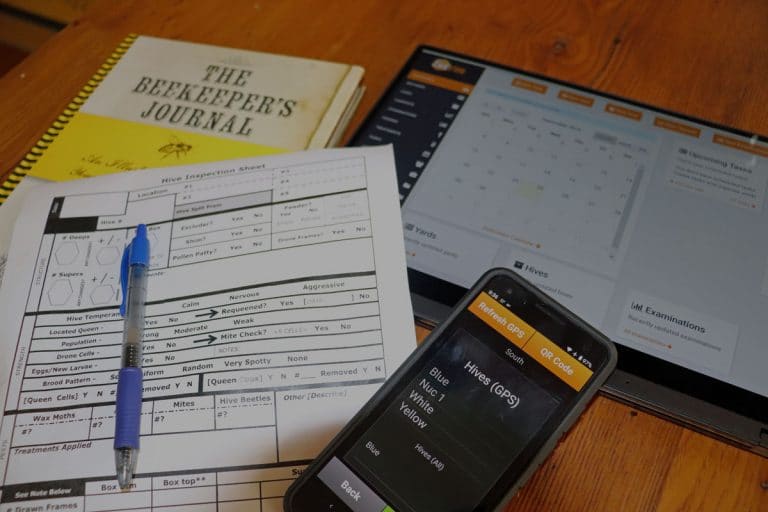 Managing beehives is a year-round task; however, the level of work and time required will vary widely with seasonal changes. Learn what you can do to help your bees not just survive, but thrive. Beginning beekeeping can get rather expensive. Here are some suggestions on how to grow your apiary without breaking your bank account. Beehive frames and foundation create a space where bees build wax comb to store food and raise brood. Rectangular frames hold a wax or plastic sheet of foundation embossed with hexagonal cells serving as a base for drawing straight comb. A queenless hive needs prompt attention to avoid the loss of an entire colony. This article describes how to assess if the hive is queenright and what to do if it is not.