What do honey bees make besides honey?

Honey bees produce more than just honey – they also make nectar, propolis, beeswax, bee brood, bee venom, royal jelly, and pollen, which all have unique uses for humans. Beekeepers harvest the hive products for a variety of uses including in food and drinks, natural remedies, cosmetics, and dietary supplements.

In this article, we will explore each of these products, how they are made by the bees, how beekeepers harvest them, and some of their commercial uses.

Honey bees make honey-it’s In their name after all. It is the one hive product I think everyone is familiar with.

Honey is a sweet, sticky food produced naturally by honey bees using the nectar from flowers.

To make honey, bees collect nectar from flowers and store it in their honey stomachs. As they return to the hive, other bees take the nectar and mix it with enzymes to break down the sugars, put the mixture into wax comb cells, and evaporate some of the water.

Once the bees determine that the nectar has become honey, they cap the cells with wax storing it safely for future use. Honey is the primary food source for adult bees.

Beekeepers harvest surplus honey by removing the honeycomb frames from the hive and extracting the honey using a machine or by hand. The honey may be extracted in purely liquid form by separating it from the wax comb, or it may be removed from the hive complete with the wax as comb honey.

Note: “Surplus” honey is honey the beekeeper determines the colony can survive without.

Humans use honey primarily as a food product, particularly as a sweetener in food and drinks. Honey is also a natural remedy for a variety of ailments and is used in the production of cosmetics and skincare products.

Learn more! For additional details on how honey is made, its various form, and multiple uses, see our article What Is Honey? (A Guide For Beginning Beekeepers).

Nectar is a sweet liquid produced by flowers and collected by bees to make honey.

To collect nectar, bees fly from flower to flower, using their long tongues to suck up the nectar and store it in their honey stomachs. In addition to its use in the production of honey, nectar is also used by humans as a natural sweetener in food and drinks.

While nectar may technically be a hive product, beekeepers only extract it from the hive once it is converted to honey.

Beeswax is a wax-like substance produced by honey bees to build a honeycomb.

To make beeswax, bees secrete wax flakes from special glands on their abdomen and then chew it until it becomes pliable. The bees then use the wax to build the honeycomb, a wall of hexagonal cells used to store pollen, nectar, and honey and to provide a place for the brood to develop.

Beeswax is harvested by beekeepers by removing comb from the hive, melting it, and filtering out impurities.

Some common products made with beeswax include:

Propolis is a sticky substance produced by honey bees using resins that are collected from trees and plants.

To make propolis, bees mix the gathered resins with wax flakes that they produce. The resulting substance is used by bees to seal cracks and gaps in the hive, as well as to protect the hive from pests and diseases.

In addition to sealing cracks and gaps, hardened propolis essentially becomes an adhesive between components in the hive. Thus, propolis is often referred to as “bee glue.” The seal created by propolis is so strong that beekeeper use hive tools to separate components.

Propolis is harvested by beekeepers by scraping it from the hive or by using a special “trap” to collect it.

Propolis has a variety of uses for humans, including as an ingredient in cosmetics and as a natural remedy for a variety of ailments.

Some common products made with propolis include:

Learn more! See our article What Is Propolis? for more information.

Pollen is a fine, powdery substance produced by plants for reproduction and collected by foraging honey bees.

To collect pollen, bees fly from flower to flower, using their hairy bodies and specially adapted legs to gather the pollen. In the hive, pollen is mixed with nectar and bee saliva and stored in the honeycomb becoming “bee bread.”  Bee bread is used by bees as a source of protein and is the primary food fed to the brood.

Pollen is harvested by beekeepers using a special device called a “pollen trap,” which scrapes pollen off the bees’ legs as they enter the hive.

Pollen has a variety of uses for humans, including as a natural dietary supplement and as an ingredient in cosmetics and skincare products.

It is believed to have a variety of health benefits for humans and is harvested by beekeepers by scraping it from the hive with a tiny spoon or using a suction tool (like a syringe).

Royal jelly is used as a natural remedy for a variety of ailments, such as hay fever, menopause and dry eye. However, according to WebMd, there is “no good scientific evidence to support these uses.”

Bee brood is the term used to describe the eggs, larvae, and pupae of honey bees. It is produced by the queen bee and is used to reproduce and maintain the hive population

Bee brood is not typically harvested by beekeepers, but it is sometimes used as a food source in some parts of the world.

Also, some beekeepers earn money selling bees to other beekeepers. In most instances, bees are sold in “bee packages” which is simply a box of bees.

However, bees are also sold in mini-hives called a nucleus colonies, or a “nuc.”

In addition to bees, nucs include frames of bee brood.

Thus, bee brood, and bees themselves, are products of the hive.

Bee venom (apitoxin) is produced by honey bees and is used as a defense mechanism to protect the hive from predators.

According to Bee Culture’s article Apitherapy, “Bee venom is a mixture of proteins, amino acids, water, and volatile compounds that cause a painful reaction.”

Learn more! See our article about honey bee stings and the effects of bee venom when stung.

To collect bee venom, beekeepers use a special device to stimulate the bees to sting a collecting plate. The bee venom is then extracted from the plate and purified for use.

Bee venom has a variety of uses for humans, including as a natural remedy for a variety of ailments and in the production of cosmetics and skincare products.

If you learn to harvest and process these hive products, you have the opportunity to create commercially viable items to earn some money. Honey bees collect pollen (protein), nectar (carbs), and water as primary food sources and use them as building blocks for honey, bee bread, and royal jelly. A honey house is a sanitary space where beekeepers process their honey harvest. As your apiary becomes larger, you may want to have a dedicated space outside the home. 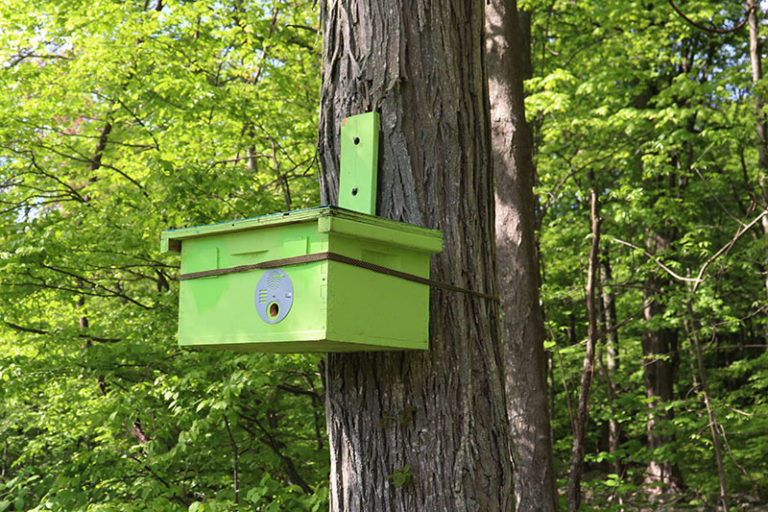 A swarm trap (or “bait hive”) is a container designed and situated to attract bee swarms. We will tell you how to get “free” bees with swarm traps.

Managing beehives is a year-round task; however, the level of work and time required will vary widely with seasonal changes. Learn what you can do to help your bees not just survive, but thrive.

Honeycomb is the six-sided wax cells built by bees to store pollen, nectar and honey. It’s also used to raise brood. Learn about its construction and uses.