In the fall, both honey bees and beekeepers work with an eye toward the upcoming winter.

As for the bees, queens reduce or stop brood production. In addition, the colony forcibly evicts drones that serve no purpose during winter and are a drain on food resources. Thus, the colony’s population dwindles from about 50,000 bees to about 10,000 – the size of a new bee package.

The smaller colony can more easily survive winter with the honey remaining in the hive.

Being a successful beekeeper requires that you get your colonies through winter with as few losses as possible.

According to a survey conducted by the Bee Informed Partnership, over 32% of managed bee colonies in the United States were lost during the 2020 – 2021 winter. [1]

The survey’s respondents identified varroa mites and queen issues as the leading causes of these losses.

A backyard beekeeper with a handful of hives can easily lose the entire apiary. For example, Vino Farm, a popular YouTube beekeeping channel, suffered a devastating loss of all but one hive.

The Cost Of Losing Colonies

For commercial and sideline beekeepers, winter losses are a cost of doing business. For hobbyists, however, colony losses are incredibly disruptive and can significantly increase the cost of beekeeping.

Replacing a lost colony with a new bee package or a nuc can cost $125 to $225. Capturing a swarm of “free” bees has costs in time and materials.

New bees require more time and effort to get started. Little, if any, first-year colonies yield little, if any, surplus honey for the beekeeper.

On the other hand, overwintered bees can ramp up population growth and honey production quickly.

Late summer and early fall are your last opportunity to improve the condition of weak colonies before winter.

Pay attention to signs that a hive is not queenright. Supplies of new, mated queens dwindle as beekeeping season winds down. Therefore, the sooner you replace a failing or missing queen, the better.

As an option to replacing a queen, unite weaker colonies with stronger ones.

Any colony with fewer than 5 full frames of bees is weak. A small cluster is unable to generate enough heat to survive a cold winter.

How To Combine Colonies

Combining colonies is a simple process.

Since you only want one queen in the hive, you need to dispatch the queen from the weaker colony.

Cover the upper box of the stronger hive with newspaper. Next, place a box with the weaker colony and some food stores on top of the newspaper.

Close the hive leaving no entrance to the upper box.

Over the next several days, the weaker colony will adapt to the strong queen’s pheromones.

Both sets of bees will chew through the newspaper, uniting the two groups of bees into one larger, more robust colony.

After a summer honey harvest, the colony may have depleted its stores during an extended nectar dearth.  Also, if fall nectar flow has been strong, the bees will have added more honey to the hive.

Before winter arrives, check again if the hive has enough supplies for winter.

To recap, the amount of honey to leave for the bees varies based on the severity of your winters. However, the following is a general guideline:

Remove any surplus honey. Contribute surplus honey from one hive to another hive in need (assuming the contributing hive is disease-free, of course).

If some hives are still short on supplies, consider feeding sugar syrup.

Fall syrup is a thick 2:1 (sugar: water) mix. Bees need to reduce the water content of the syrup before they can cap it. Thick syrup requires less effort from the bees to complete the process.

As always, if you feed, keep an eye out for robbing.

See our article on feeding bees for more information.

Varroa mites are a primary reason for winter colony losses. A hive with high mite levels in the fall is unlikely to survive winter unless treated.

Varroa populations grow in brood cells, especially the larger drone cells. When the colony is broodless and the drones evicted is an excellent time to treat for varroa.

See our guide to varroa mite treatments and our article on how to select the best miticide for more information.

Reduce The Size Of The Hive

With a drastically reduced population and no new brood, reduce the hive to house the small cluster and its winter honey stores.

Two deep, 10-frame boxes and one medium box should provide sufficient space. Adjust the number of boxes if using 8-frame or all medium boxes to give an equivalent amount of space.

Be sure to remove any queen excluders.

The final step of fall hive management is to winterize the beehive.

Winterization needs vary based on your climate. For example, northern beehives benefit from substantially more protection than those in the deep south.

Learn more! See How To Winterize Beehives for more information.

Fall hive management is all about getting your colonies ready for winter.

Winter colony losses are common and expensive. Varroa mites and queen issues are the primary causes of these losses.

Beekeepers work to limit these losses through proper fall management.

This article is part of series on managing beehives, a beginner’s guide to year-round beekeeping tasks. 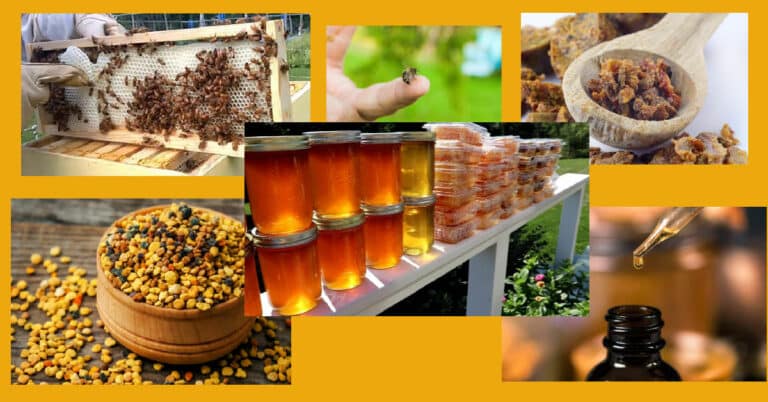 Honey bees produce more than just honey – they also make nectar, propolis, beeswax, bee brood, bee venom, royal jelly, and pollen, which all have unique uses for humans. Beekeepers harvest the hive products for a variety of uses including in food and drinks, natural remedies, cosmetics, and dietary supplements. 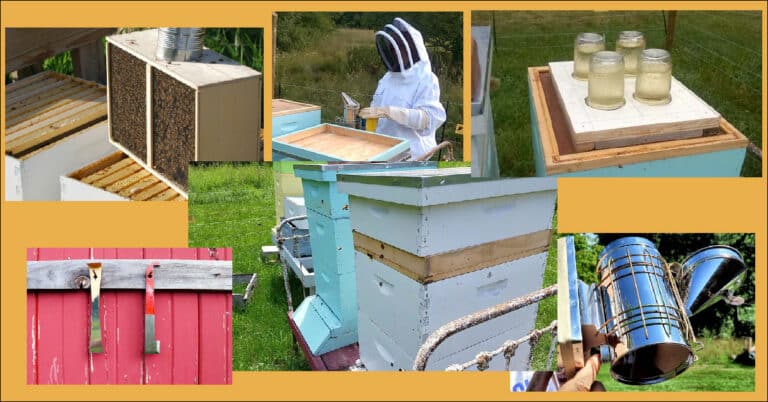 Essential beginning beekeeping supplies include reference books, a hive, protective clothing, a bee smoker, hive tools, and bee feeding supplies. And, of course, bees. Beekeeping supplies that are optional or not immediately needed include a bee brush, mite treatments, and honey extraction equipment.